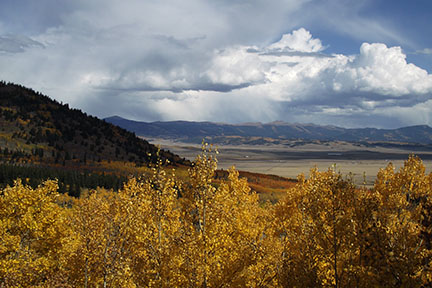 Summer
That year my daughter and I visited Breckenridge on two Sundays. The first was in mid-July. We traveled from Denver on I-70 and returned by 285. After parking in the lot by Main Street and took the free gondola ride to the Breckenridge Fun Park. In addition to the roller coaster, bungee jump, and other attractions, a mass of snow, left-over from winter, was visible behind the miniature golf course and alpine slide. The Breckenridge Fun Park is a summer attraction. In winter, the attraction is skiing.

We rode the chair lift to 11,059 feet and viewed distant peaks. We walked back to the gondola station on the Swinger Switchback trail. It took us 45 minutes.

We followed scenic Highway 9 south into Fairplay where we joined 285 for our return to the city. The summer snow melt was heavy that year. So heavy that water ran across Highway 9 at one point.

Autumn
According to rumor, this was the best weekend for viewing gold leafed aspens. And so we set out on Sunday, October 2. The weather was perfect and Highway 285 was agreeable. All along the way aspen were dressed out in fall colors. The aspen were particularly abundant at the summit of Kenosha Pass. We had plenty of company — there must have been at least 200 cars parked along the highway and the lot for the Colorado Trail. However, once we walked beyond the trail head, we didn’t see many people.

After our walk, we continued on 285 until the turnoff for Boreas Pass. We stopped in Como at Mountain Man Gallery where we picked up a large bag of beef jerky at a very reasonable price. During our visit, owner, Ricki Ramstetter told us about the real-life identities of some of the characters on “South Park.” Is truth stranger than fiction? You’ll have to ask her yourself. 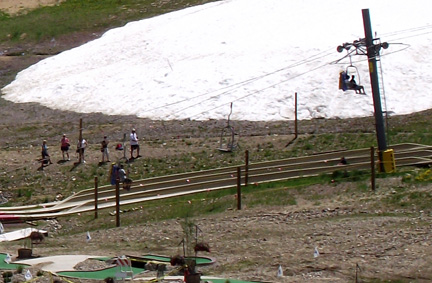 Although you’ll save distance by taking Boreas Pass instead of Highway 9 to Breckenridge, you won’t save any time. The road is unpaved and narrow in spots. The view of national forest is spectacular, but I especially liked looking down into South Park through golden aspen groves during the first portion of the drive.

The railroad station at the 11,482 foot summit of Boreas Pass is worth a visit. There you can stretch your legs, visit a restroom, or take your picture by the sign marking the Continental Divide.

We continued on into Breckenridge where we took Highway 9 back to I-70. For the most part, the traffic on I-70 flowed smoothly. However, traffic was stop-and-go from the approach to Georgetown until past Idaho Springs. And that’s a long way to be stuck in traffic. If we had turned around at the summit of Boreas Pass, we would have saved time returning to Denver. But then there’s something gratifying about taking a different route back home.