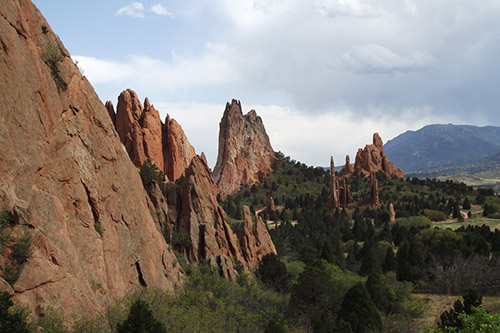 Taking the long way to the Garden of the Gods

Some routes are easy and get you there quickly. Others are more roundabout. We could have taken I-25 from Denver to Colorado Springs in order to visit Garden of the Gods, but we went the long and hard way instead.

Heading west from Sedalia, we entered the mountains on County 67. It didn’t take long before the pavement gave out and dusty washboard took its place. By the time our tires met pavement again we had travelled 22 miles from Sedalia. Much of the view along the paved portion was of burnt out forest, but when Pike’s Peak came into view, its majesty made up for the devastation.

The exit for Garden of the Gods was clearly marked after we descended into lower country on Highway 24. It was a short drive from the exit into the park. After driving a short distance in the park you’ll encounter Balanced Rock. This massive, precariously balanced boulder may compel you to stop and take a picture, but it’s only an appetizer — truly massive flatirons are still ahead. 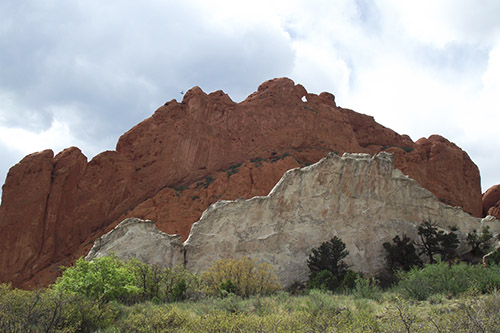 Three sedimentary formations account for much of the Garden of the Gods. These are the Fountain formation, composed of the mud, sand and gravel remains of the Ancestral Rockies, and the Red and White Lyons formations, composed of cemented sand.

Balanced Rock is a representative of the Fountain formation. The taller flatirons, or hogbacks, that are prominent features of the park are representatives of the White and Red Lyons formations.

You can drive the loop that winds through the garden in less than an hour, or you can stretch out your visit with stops for leg stretching, picnics, picture taking, hikes and visits to the gift shop and visitors center. Whether your visit is long or short won’t matter to the gods. For they are timeless.